Who knew that poor little old Dartford, kicked and teased like the runt of the Kent litter, abandoned in droves by its own people in preference for the nearby shiny happy Bluewater and sneered at down shiny noses by outsiders, should now be found to be hiding such a wealth of undiscovered creativity? Despite living in the area for 29 years, I have in the past few months realised I have barely scratched the surface of what seems to be an impressive but currently sadly under-connected network of artists and art-lovers.

Dartford Creative, an initiative brought to us by Icon Theatre, aims to unearth and develop these links, stimulating that much-neglected erogenous zone of the area; its creative core. Thanks to the tireless and dedicated co-ordination of Nancy, Michelle and countless others involved in the programme, whose belief and optimism have succeeded in overcoming even the most cynical challenges in their path, the enterprise has resulted in an inspiring programme of art events running every Saturday until Christmas. The thinking behind the plan is effectively simple; this series of events is a starter for ten, intended to whet the creative whistle of locals and to initiate a dialogue which will extend to next year, and the next, carrying on the tide the potentially valuable trawl which will be unearthed through this exercise.

Dartford itself has a long and fascinating history involving no less than rebel kings of England, revolutionary leaders and a few famous Artist/Sirs of its own, including Sir Peter Blake who, for those of you who don’t know, designed the famous Beatles Sgt. Pepper album cover. In fact rather a lot of impressively significant events have touched upon the area, as well as some of the more insignificant but equally fascinating! I was, much like many other Dartfordians I imagine, sadly bereft of much of this information until researching for a piece in Dartford Living on the local gasworks. Upon beginning to dig for information I found myself enthralled at the stories I found, each painting a vivid picture of what the town had been, decades, or even centuries before.

Bringing this history to life is one important facet of the Dartford Creative event and will ensure that this knowledge is both stored and nurtured by participants, passed on and down to the next generation; a treasure hunt on 21st September explores local buildings perhaps usually passed by without a second thought. A beautiful 17th Century pub goes unnoticed day by day, while Victorian shop first floor facades gaze down on the high street mournfully, unseen by shoppers. Events such as the treasure hunt specifically aim to point out sites of local importance, but a running theme throughout the programme is the importance of highlighting of a side to Dartford which lies largely in our unconscious; the historical side, the artistic side, the worth-listening-to side. The effects of probing this point continuously, weekly, are that it will stick and grow. It will germinate and spread tendrils of thought which could lead, well, who knows where? I myself have already made nearly 10 fascinating new acquaintances with whom I’m in regular contact and will continue to be after the event finishes. How many could you make? You see the potential.

Since the project launched on 10th August we have already seen a 50’s style street party, clay model making, the launch of the much-anticipated film competition (which will culminate in the winning film being shown in the eye-wateringly cool mini solar cinema), and, brightening up a rather rainy day last Saturday, ukelele lessons from inspiring teacher Steve Ball. Coming up this weekend is your chance to find out about the history of the street you live in and contribute to the town’s own Blue Plaque programme. If you have any sense at all you’ll be down there each and every Saturday without fail, bright eyed and bushy tailed at 10am like a dog on a promise for some buttery toast. But for those of you who might, like me, be a freakishly over-organised planner and not be able to make this one, don’t panic. DON’T PANIC. There’s the treasure hunt the week after that,  then Mr E’s intriguing theatrical museum on the 28th and much, much more to come. Let me not hear you say ‘Oh that’s not for me, I’m no good at art”, as is often the standard, negative protest from the crowd; if even the dog can get involved in playing the ukelele (see photos), I’ve not doubt you can manage it too.

Expect to see a few more posts on this, intended to both keep you up to date and to nag you like a spoilt 10 year old until you defeatedly submit to getting involved, and are within minutes running around gleefully covered in paint/clay/ukeleles etc.

Dartford Creative runs every Saturday at One Bell Corner from 10am-3pm.

Informal artist networking meetings are taking place at the Bull & Vic on the high street (opposite Lloyds bank) on the following dates:

All welcome. Please come, I want to meet you all!

To enter the film competition see the details on the website and submit your entry to Vimeo by 1st Nov. 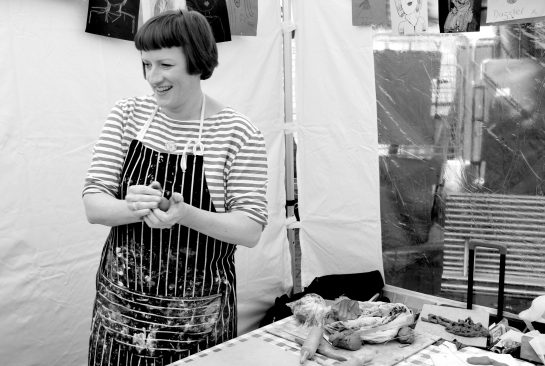 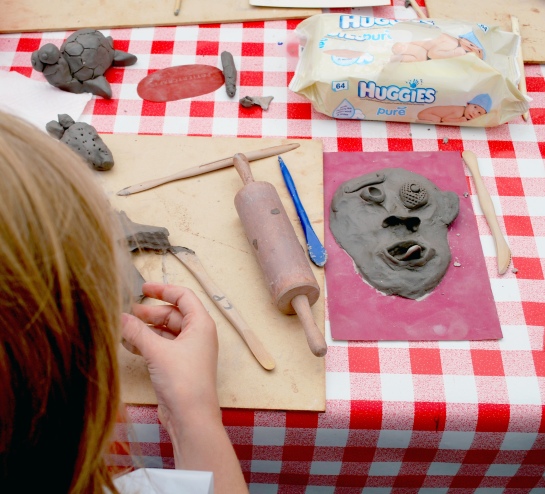 A clay face materialises out of the table… 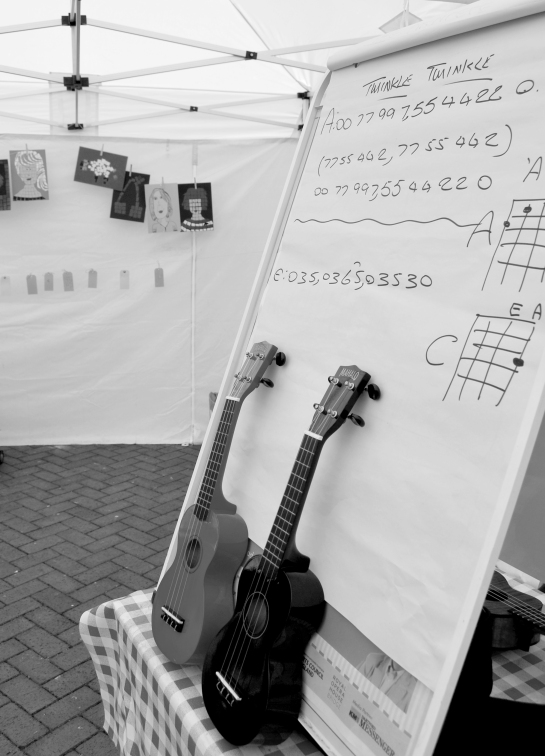 Ready for the next group of eager Ukelele students 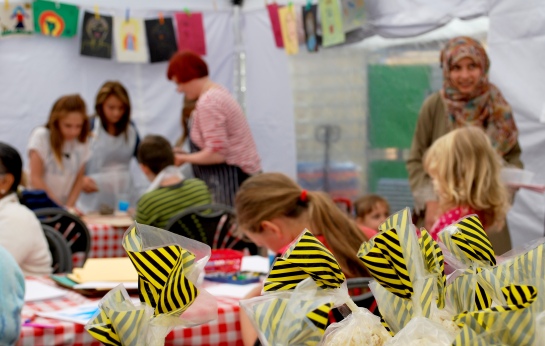 Free popcorn while you paint – what’s not to like!?

A mini-gallery of some of the work produced so far 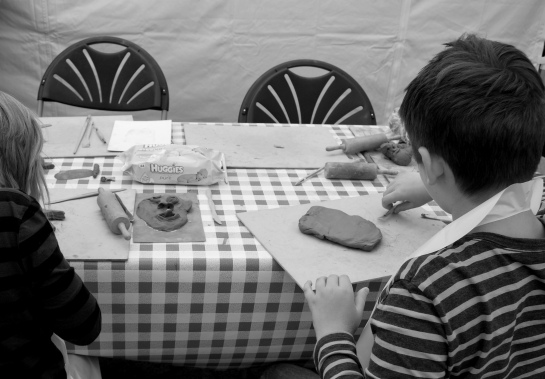 Kids getting their hands deliciously dirty with the clay models 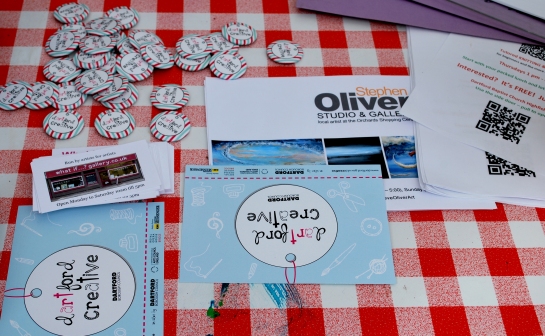 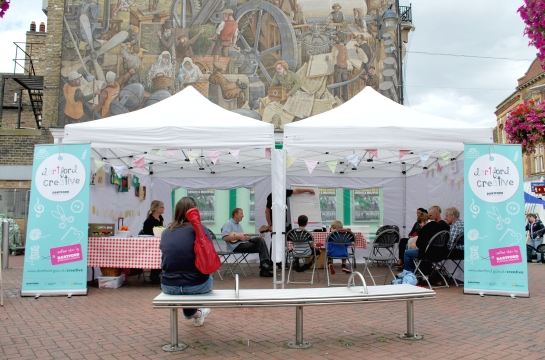 An unofficial addition to the creative vibe of the event – just down the road, local street artist Gee injects some life into the drab hoardings of the derelict shops waiting for development 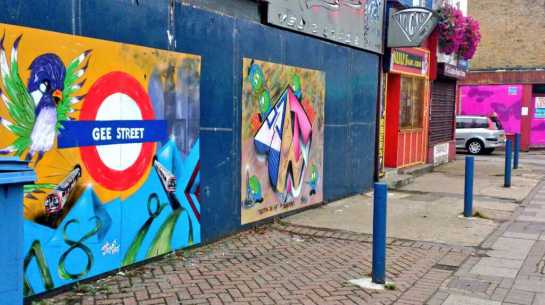 This work is licensed under a Creative Commons Attribution-NonCommercial-NoDerivs 3.0 Unported License.
4 comments